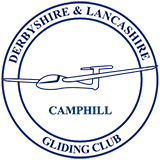 The club uses two-seat gliders to offer training and Introductory Flights. All have dual controls, enabling the glider to be flown from either seat. The normal format is a tandem arrangement, where the instructor sits in the rear, and the student sits in the front. This layout prepares the student for solo flight, where you’ll be on your own. After training, your first solo flights will be taken in the two seater, sitting in the front seat as usual, with only the memories of the instructor’s voice floating forward from the rear to accompany you.

Our three Puchacz gliders are the cornerstone of the club’s fleet. The Puchacz is specifically designed as a training glider, reacting as it should in all circumstances. Made of fibreglass, they are very robust, sleek and modern in appearance, and relatively efficient aerodynamically. Their handling is ‘solid’, requiring the pupil to make deliberate control movements to aid their development of the required control co-ordination skills. In steady flight they will benefit from more subtle, but still co-ordinated, control movements to maintain smooth flight.

Equipped with three wheels, which are fixed in the ‘undercarriage down’ position, these gliders can be identified as “trainers”. It all helps with those early landings! Further clues are the powerful airbrakes for controlled descents, and the lack of flaps, matching them to the gliders that will be flown by the early ‘solo’ pilot gliders.

Or K13 for short. This is an incredibly popular training glider, of which more than 700 were made. Constructed of a steel tubing framework, and covered in plywood, fibreglass and fabric, the K13 is reliable and robust. Their handling is predictable, always responding as expected, with easy recovery from stalls and other out of position scenarios. The cockpit is roomy, allowing for those extra few layers on a winter’s day. The K13 has quite an upright seating position, lending the air of gentlemen’s carriage rather than speed machine – you’ll find yourself more prone in the Puchacz. Their docile handling and slow flight makes them well suited to flights ranging from early training, through the first solos and on to lazy days floating in our ridge, wave or thermal lift.

Reminscent of a flying barge, the T21 will be familiar to many an Air Cadet from the 1960’s and 70’s. Very slow flying and arranged in an open cockpit side-by-side seating pattern, they are a sociable and relaxed way to fly. Less often used for tuition, many are now being restored for the pleasure of their simple flying and feel for the air. On a thermic day, the barge will stay aloft until it is time for tea and cakes.

Our T21 is known at the Ken Hardy in honour of the gentleman who performed much of the restoration.

Derbyshire and Lancashire Gliding Club owns and operates four single seater gliders – two each of the K8 and K18 types. These gliders come from the same stable as the K13, so there is a natrual progression from one to the next. They are well suited to early pilots, all the way up to Silver height, and the K18 especially for the Silver distance and endurance flights. We have found over the years that they are very well suited to early forays ‘local flying’ in and around the Peak District.

We have two K8 gliders, one fitted with a conventional perspex bubble canopy, and the other with an open ‘cabriolet’ variant. The former is comfortable if a litle drafty by modern standards. The latter requires goggles and Biggles style headgear. It doesn’t half put you in touch with flying ‘old-school’, and is very popular in summer. Fortunately, we can revert to the normal enclosed bubble when we need to.

The Ka 8 is very similar to the K13, essentially being a single seater variant. Hence it is the glider our new soloists fly after their two-seater solo. It is easy to handle, and talks to you if you’re not quite coordinated. Short landings are the norm, so there’s always room to get back onto the airfield, building pilots’ confidence with each flight. Experienced pilots will often opt for the K8 for its ability to out-climb almost anything in light thermals.

We operate two ASK 18s for the intermediate solo pilots. The “K18” is arguably the ultimate in so called wooden gliders, being the last such construction to be designed and built by Schleichers. Overlapping the newer fibreglass gliders in construction eras, it wasn’t built in large numbers, so we are fortunate to have two such fine examples. They are docile, communicative and safe to handle for new pilots, yet have more performance than the K8. They are able to penetrate into wind, and climb well. With a low stall speed and high wings, they are suited to landing out and facilitate accurate landings. These gliders tend to be the pick of the keen Peaks explorer.